For over 20 years five generations of Shimano Live Release Boats have safely returned millions of tournament caught bass, walleye and other fish to their home waters alive and unharmed. Our original boat design by Tom Brooke at Shimano Canada and practical idea of releasing fish at prime habitat locations on tournament lakes has been adopted by event organizers across Canada and the United States.

Shimano Live Release Boats have been used to transport hatchery fish for stocking in remote locations, for fishery research projects from the west coast to the Great Lakes and even adapted for underwater fish structure placement in the largest habitat improvement project ever undertaken in the U.S. on Lake Havasu, Arizona.

Our partners include Ranger Boats, Mercury Marine, Lowrance Electronics, Princecraft Boats and Queen’s University. All working together in the spirit of conservation. 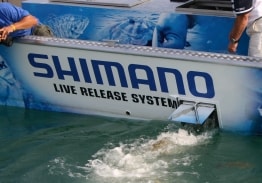